We know little of the recipes from the Viking era, but knows a lot about the ingredients the Vikings had at their disposal through archaeological excavations. It is among others found “remnants” of food in pans and waste piles. Something is also featured in writings from this era. Everyday food for the Vikings was often porridge and soups / stews. Meat was mostly for celebrations. They also had access to milk, honey and eggs. They used sour milk and made cheese, beer and mead. The beer was thin and was drunk everyday. Mead is a honey wine that was drunk for special occasions.

A great thanks to Daniel Serra for correcting
some mistakes on this table.

Absolutely crazy about fish
Fish, especially herring, often stood on the menu when the Vikings sat down to eat. They ate lots of stockfish and dried fish too. They also ate whales and seals. And believe it or not, they ate sandwiches made from thick slices topped with a type of butter, and meat of wild boar, deer, elk or bear. Honey was often used as sweeteners in these dishes: they loved sweetening in soups too so they added honey and they sometimes had garlic.

Many ingredients were the same as today, but they could have a different status. For example, horse meat was considered a delicacy and was only served on special occasions. Porridge of barley, oats and other grains were prevalent among the poor. It was often sweetened with berries or apples. They had no sugar.

English sources refer to the Vikings as great eaters.

About the book “An Early Meal – A Viking Age Cookbook and Culinary Odyssey: To assemble credible recipes they had too look at the ingredients that are proven by archaeological excavations in Viking settlements. Written sources from England and Scandinavia also tells a lot about the ingredients Viking Age Scandinavians knew and used, and through studying later general culture like if one knows some methods and recipes from later medieval times. Using this information, and by experimenting, they have put together recipes. The authors point out that what one ate depended on who you were, in what occasion the food was served, and not least in which season.

Herbs that were cultivated / used in the Viking Age

Angelica
Has been cultivated since Viking times and is the only herb that was exported from Norway to the rest of Europe. Every farm would have its angelica garden. Angelica comes early in spring (in mild winters sprouts  in January), can be used as vegetable and is rich in vitamin C.

Nettles
In Norse mythology, nettles was the god Thor’s growth. When he thundered across the sky Vikings threw nettle on the fire. Then they were safe from lightning because they had sacrificed Thor’s growth to him.

Already in the Stone Age nettle fibre were used in fishing nets.

Nettles was Scandinavia’s main textile plant. Stems contains fine, strong fibres treated in much the same way as flax. Nettle fabrics resembles a cross between cotton and linen. Nettles was also used both for clothing, fishing lines and ropes.

Elder
“Where there are elder, honey and cabbage, the doctor is a poor man.” (quote from Edda). It was believed in ancient times that elder was Freya’s residence and that it brought misfortune if one eliminated elder close to the house without planting a new one.

Elderflower tea: Dry blossom. Take a few clusters in a cup and pour in boiling water. Let it steep, sweetened with honey.

Yarrow
Yarrow has been known as a medicine plant for more than 6000 years.
It was regarded as a panacea that seemed styptic, wound healing. The Vikings had yarrow with them on raids. They made an ointment from crushed yarrow leaves and fat and applied it on wounds.

Yarrow is also said to have a calming effect. It dissolves mucus and reduces cramping and prevents inflammation in the intestines. Chew it against toothache. Yarrow in hair wash gives a fine, shiny hair.

Yarrow contains thujone and is therefore suitable as an insecticide against mosquitoes and moths. Yarrow was useed in food and drink, as a seasoning for mutton, soups, on fatty fish, in sausages.

The plant is also called “terrestris” or “ølkong” because it was used as a flavouring in mead and beer. 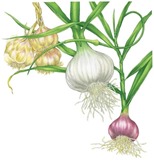 Garlic (Allium sativum)
Garlic is mentioned in one of the Edda poems as antidote to poisonous drink and was in the Viking age known as preservative.

All harmful animal shuns the smell of garlic. Whoever eats garlic, can without endangering drinking water from unfamiliar places. Garlic was used for crushing and swelling, and it reduces headaches. Along with goose fat it was in the ears against ear aches and put on the gums against toothache. It was also used  against for cough, dropsy, constipation and jaundice.

Hops
was cultivated and used by the Vikings for seasoning of beer.  Statutory hops cultivation was started already approximately year 1000. Hops were grown by every farm. And god helps whoever stole from another man hops farm.

Hops is a climber and can be up to 15 ft. / 5 m long. You reap just pinecone fruits of female plant and the Vikings used these for beer production and partly in soothing tea blends.

Meadowsweet
Meadowsweet has large space in Scandinavian cultural history as a fragrant plant. Previously, it was customary to sprinkle floors with chopped meadowsweet on holidays because it smelled so good.

Meadowsweet contains salicylic acid and has been used as antipyretic and analgesic.

broadleaf plantain
Came to the north with the first Stone Age settlers  6-7000 years ago. Called “groblad” (healing leaf) in Norwegian. 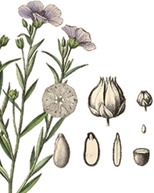 Flax
It has grown flax in Norway since the early Stone Age. Flax is an important raw material in textile production. Linen was with wool one of the Vikings’ main textiles.

25 thoughts on “What Did The Vikings Eat”