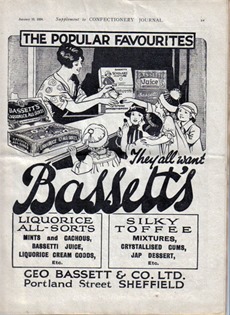 Liquorice allsorts (also spelled licorice allsorts) consist of assorted liquorice sugar candies sold as a mixture. These confections are made of liquorice, sugar, coconut, aniseed jelly, fruit flavourings, and gelatine. They were first produced in Sheffield, England, by Geo. Bassett & Co Ltd who had taken over Wilkinsons (Pontefract cakes, and licorice mushrooms, a confection with a licorice “stipe” and coconut-covered “cap”), Barratt’s (sherbet fountains/sweet cigarettes), and Trebor (mints) before themselves being taken over by the Cadbury’s consortium. 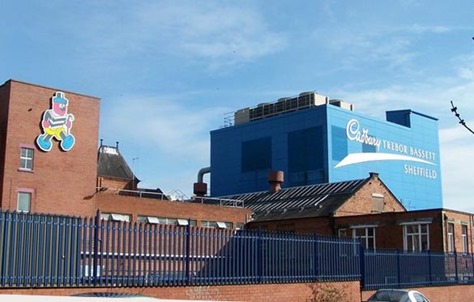 For more than 50 years George Bassetts factory in Sheffield  made many different types of candy. Then it happened that an incredible accident that change the candy history forever.

Since 1842 George had Bassett’s factory in Sheffield produced a growing number of candy varieties. Among the employees factory had a slightly goofy salesman, Charlie Thomson.

According to the factory own story Thomson was in 1899 on a visit to a difficult customer in Leicester who refused to buy a single one of those sweet products. The goofy Thomson lost his sales board with the entire range of liquorice and other sweets down on the counter. When the customer saw the colourful sight of mixed candy, he was so excited that he ordered a large delivery of the new goodies. Thomson hastened to call it “Bassett’s Liquorice Allsorts.” The name has been in use since then and the liquorice sweet is one long success story. Bassett’s trademark is a little man made of sweets – he is called Bertie Bassett and had his debut in 1929. 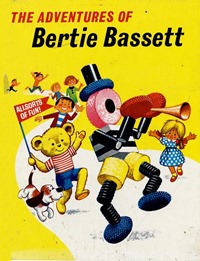 Bertie Bassett has become a part of British popular culture. The character’s origins lie with advertising copywriter Frank Regan, who used the sweets and a number of pipe-cleaners to construct what was the original version of Bertie. One of the sweets in the modern day allsorts mix is a liquorice figure shaped like Bertie.

The Doctor Who television serial The Happiness Patrol featured a villain called the Kandy Man, who resembled

Bertie Bassett. Although an internal investigation concluded that the programme had not infringed on Bassett’s trademark, the BBC promised Bassett’s that the Kandy Man would not appear again.

In the 2001 satirical comedy film “Mike Bassett: England Manager”, the figure of Bertie Bassett appears in a short scene on a newspaper with the headline “Bassett’s Allsorts”.