An article by Stephanie Butler posted in
Hungry History at history.com June 2015

It’s likely you’ve heard the adage “An apple a day keeps the doctor away,” and everyone knows about the reputed healing powers of a 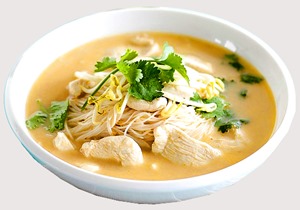 steaming bowl of chicken soup. But would you think to place potato slices on a fever-stricken patient’s forehead? Or shampoo with mayonnaise to give your mane that healthy shine? Foods have been used as medicine since our Neolithic ancestors ate mosses with antibiotic properties to help heal wounds. It’s a long road from healing mosses to zinc lozenges, so let’s take a look at the world of food remedies.

Several hundred years before Alexander Fleming discovered the benefits of penicillin, European housewives kept moldy loaves of bread hidden in their kitchen cabinets. When a family member got a cut or scrape, they would break off bits of the moldy bread, mix it with water to form a paste and paint it over wounds. This method was hardly a cure-all, since it depended on the natural presence of penicillium or other antiseptic molds to be beneficial. But when it did work, the bread treatment must have seemed like a godsend in a world lacking even a basic understanding of how diseases spread.

These medical dark ages lasted far too long for many patients. From the medieval era all the way up through World War I, wartime was especially harrowing for patients and doctors. During the Civil War, for

instance, more men died from disease than on the battlefield. People resorted to food- and plant-based remedies because demand for more scientific medicines far outstripped supply. For example, both Northern and Southern troops placed poultices of cooked onions and garlic on their chests to combat croup and congestion. In 1863, Alabama’s Mobile Register gave a delicious-sounding recipe for blackberry cordial that promised to “alleviate the suffering and perhaps save the lives of many of our soldiers” who were sickened by drinking typhus-contaminated water. Baking soda was administered to treat upset stomachs, and sprained limbs were often soaked in salt solutions, a practice that continues today. For amputations, unlucky soldiers were often given wooden spoons—not to cook with, of course, but to clench in their teeth.

At the same time, an ocean away, England was experiencing a true golden age of food remedies. Modern medical breakthroughs like pasteurization (in 1862) and the stethoscope (in 1852) were finally

beginning to catch up with kitchen cures, creating a uniquely British blend of folk wisdom and scientific method—the apothecary shop. Modern treatments like morphine, laudanum and chloroform found places on apothecary shelves right next to rosemary tinctures and essence of sage. Receipt books from the period show a real appreciation for the healing powers of lard, which could soothe chapped hands, ease inflammations and help repair burns. Herbs were used liberally in the Victorian home: Dill water could calm a colicky baby, lovage and peppermint were brewed into teas to cure upset stomachs and rosemary-infused alcohol was used for pain. Looking through Victorian medical books, we can see many treatments still familiar to us today. Add two handfuls of oats into a warm bath, for instance, and eczema and chickenpox sufferers would itch no more.

But what about the proverbial apples and chicken soup? Do they really work as well as folk wisdom seems to dictate? While an apple a day certainly won’t guarantee perfect health, apple extract has been shown to decrease cancer cell growth dramatically. Just don’t forget to eat the peel—that’s where most of the beneficial nutrients are found. And a 2000 study demonstrated that chicken soup does indeed have anti-inflammatory properties that help reduce cold symptoms. As for lard salve and onion poultices, however, the jury’s still out.