Dr. Nut was a soft drink produced by New Orleans-based World Bottling Company (and later by another New Orleans company, Wright Root Beer). It was introduced in the 1930s and was produced until the late 1970s. Dr. Nut had a distinct almond flavor, similar to Amaretto liquor, and bottles were characterized by their plain logo depicting a squirrel nibbling on a large nut. In the 1940s it was marketed at a competitive price, was known for its slogans, and for having a man in a running costume who ran with the Mardi Gras parades. 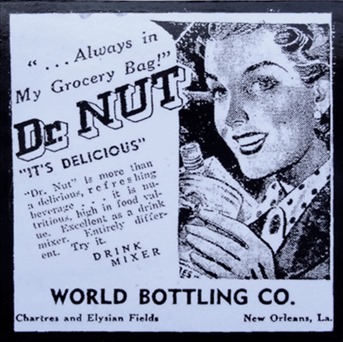 The drink was made famous to a new generation in John Kennedy Toole’s novel A Confederacy of Dunces, in which it is a favorite drink of the main character Ignatius Reilly. His copious consumption of the drink is a comic example of the discrepancies between Ignatius’ purportedly ascetic medieval values and his undisciplined, gluttonous lifestyle. 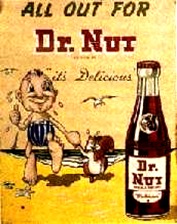 By the time the novel saw print, the beverage was already out of production. A different company attempted to revive the product, but the taste of the new drink lacked the almond flavor of the original and was not well-liked by consumers.

Dr. Nut advertising used to feature a man on the beach, wearing half a nutshell as a bathing suit, and a squirrel as his friend. Many people dressed as this amusing figure during the New Orleans’ Mardi Gras parades.