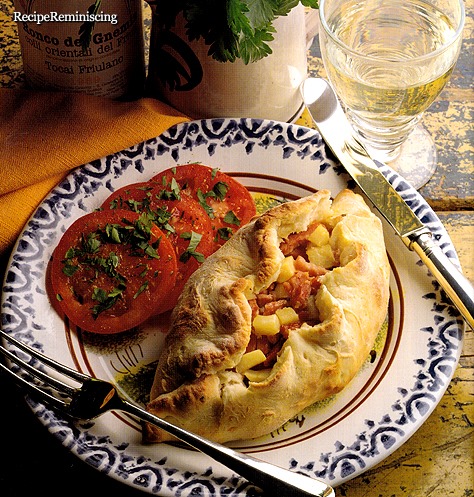 This recipe originates from the Alto Adige region in northern Italy. Feel free to substitute ham with other types of pork. But do not cut out horseradish, it brings out a lot of flavor from the meat and apples. One variation is to form the calzone with an open top.

[2] In a thick-bottomed pan put the ham, apples and horseradish mixed together and cook gently over low heat, without a lid, until softened, about 5 minutes. Stir occasionally.

[3] Divide the dough in four. Shape each into small pizzas, about 15 cm in diameter. Divide the filling between the four pizzas; place it on one half and leave a free edge of at least 1.5 cm / 3/5 in. Brush the edges with water, fold the empty half over the filled one and press the edges together. If you want to create an open calzone, add the filling in the middle of and pizzas shape them like small boats. The edges folded overthe filling should only leave a 3-4 cm / 1 – 1 1/2 in opening (see picture).

This is a “modern” dough that can be used for all varieties of pizza which is based on the classic pizza dough.

[1] Dissolve yeast and warm water in a small bowl. Stir together flour and salt in a large bowl (or on the counter) and form a small mound. Make a crater at the top of the heap, add the yeast mixture and stir around and around with a fork, preferably of wood, until it is gradually being mixed into the flour . Continue to stir until you can shape the dough.

[2] Sprinkle most of the extra flour on the counter and move the dough over there. Knead the dough until it is smooth, ca. 10 minutes. Form it into a ball.

[3] Grease the inside of a large bowl with oil and place the dough in it. Cover well with plastic wrap and let the dough rise at room temperature until it is twice in size, 30-60 min.

[4] Turn the dough back on the counter (where you have previously sprinkled the rest of the extra flour). Gently press a portion of the air out of the dough by hand and begin to shape it. Keep one hand in the center of the dough and use your other hand to pull out, lifting and stretching the dough outward until you have the thickness you want. Approximately 6 mm thick for a crispy pizza, and about 12 mm for a thicker and juicier one. Turn the dough a few times and feel free to use the rolling pin as the dough is flattened.

[5] The dough should be slightly thinner in the middle than at the edges. Lift up a small portion of the edge, compress and create a small elevated edge and continue doing it till you have finished the whole pizza. Move the dough to a baking sheet, cover with a kitchen towel and allow to rise until it is almost twice as thick, about 20 minutes. Now you can fill and bake the pizza.