In context: Apple orchards and brewers are mentioned as far back as the 8th century by Charlemagne. The first known Norman distillation was carried out by “Lord” de Gouberville in 1553, and the guild for cider distillation was created about 50 years later in 1606. In the 17th century, the traditional cider farms expanded, but taxation and prohibition of cider brandies were enforced elsewhere than Brittany, Maine, and Normandy. 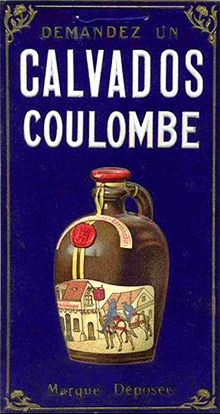 The area called “Calvados” was created after the French Revolution, but eau de vie de cidre was already called calvados in common usage. In the 19th century, output increased with industrial distillation and the working class fashion for café-calva. When a phylloxera outbreak in the last quarter of the 19th century devastated the vineyards of France and Europe, calvados experienced a “golden age”.

During World War I, cider brandy was requisitioned for use in armaments due to its alcohol content. The appellation contrôlée regulations officially gave calvados a protected name in 1942.

After the war, many cider houses and distilleries were reconstructed, mainly in the Pays d’Auge. Many of the traditional farmhouse structures were replaced by modern agriculture with high output. The Calvados appellation system was revised in 1984 and 1996. Pommeau got its recognition in 1991; in 1997, an appellation for Domfront with 30% pears was created.