Vanilla is the only fruit-bearing member of the orchid family and is native to central Mexico. The ancient Totonac Indians of Mexico were 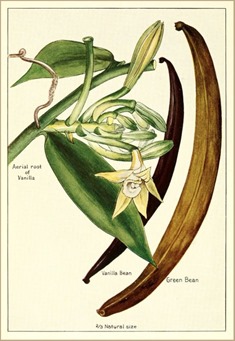 the first to learn to use the fruit of the Tlilxochitl vine, vanilla pods. After their defeat by the Aztecs, they were forced to relinquish control of the exotic fruit.

The Aztecs were, in turn, defeated by the Spanish, who returned home with the precious vanilla beans – which were for many years, enjoyed only by the nobility and the very rich. Eventually, the use of vanilla, while still quite expensive, became widespread throughout Europe.

Thomas Jefferson is credited with introducing vanilla to the United States in the late 1700s. While serving as Ambassador to France, he learned the use of vanilla beans, and when he returned to the

Today, vanilla beans are grown in several distinct regions of the world. This produces vanilla beans with unique regional characteristics and attributes, each particularly suited to different uses.

Madagascar, the world’s largest producer of vanilla beans, is the source of the famed Madagascar Bourbon vanilla and still produces the world’s finest and most consistent vanilla. (Incidentally, the term “Bourbon” has nothing to do with the liquor produced in Kentucky – but rather, derives its name from the old name for Madagascar – the Bourbon Islands.)

Madagascar Bourbon vanilla is considered to be the highest quality pure vanilla available, typified by a creamy, sweet, smooth, mellow flavor. Madagascar Bourbon Vanilla is known for its “staying power”, which makes it especially suited to pairing with rich foods.

Mexico, where vanilla originated, now produces only a small percentage of the harvest. Mexican vanilla beans, grown by skilled producers that carefully harvest and cure every pod. It’s this process that produces Mexican vanilla of exceptionally high quality and flavor.

Spicy Mexican vanilla is known by its creamy flavor that complements dishes that contain chocolate, cinnamon and other warm spices. A teaspoon or so of Mexican vanilla in tomato sauces or with citrus can also help reduce acidity.

The last of the four major vanilla-producing regions is Tahiti. Tahitian vanilla, grown from a different genus of vanilla orchid (Vanilla Tahitensis Moore), is flowery, fruity and smooth.

Long a favorite of professional bakers and pastry chefs, Tahitian vanilla is known for its aromatic, fruity, cherry, anise-like flavor profile. Tahitian Pure Vanilla has a particular affinity to fruity flavors such as fruited yogurts, sorbets and fruit toppings.