A Norwegian recipe with spelt found on mills.no 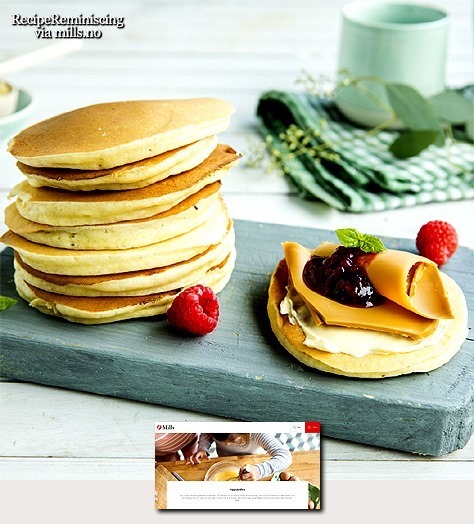 These airy and juicy spelt patties makes any Sunday brekfast perfect. If you have a few left over, they are also great for the lunchbox. They stay nice and juicy over time. The recipe gives about 16 patties.

A recipe for delicious rice patties found on mills.no 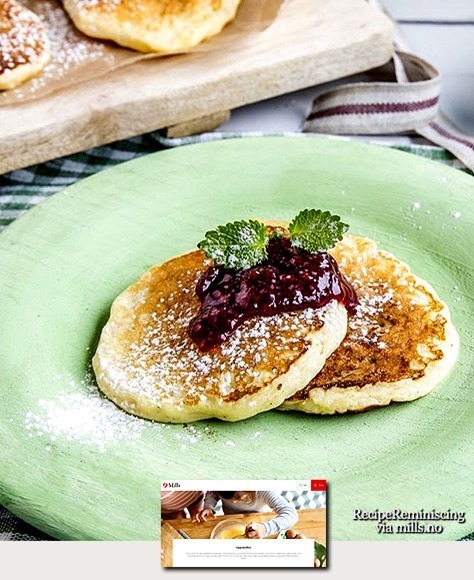 There is no reason to throw away the remains of the rice porridge, because tit can be transformed into these lovely rice patties. Make them for breakfast or an evening meal and server with your favorite spread. The recipe makes about 12 patties. 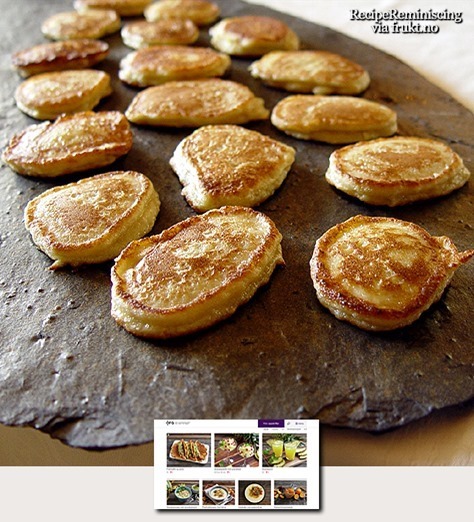 These potato patties are very easy to make and can be used for a lot of different kind of meals. For breakfast, lunch, dinner, dessert, hiking food or an evening meal. And you can spread them with just about anything.

A modernised version of the classic Norwegian
crab patties found on godfisk.no 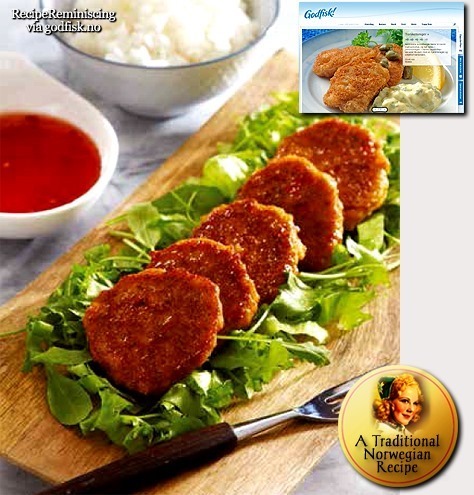 Crabs live on the bottom of the sea, from shallow beach areas down to 300-400 meter / 1000-1300 feet depth. In Norway, it is usually found as deep down to 50 meter / 165 feet and in areas with a lot of stones. Fall is the main season for catching a crab here. Then the crab are at their best, with plenty of meat in the shells and a delicious white meat in the claws.

Crab meat has been used to make patties like this in Norway for a long time. This recipe on the other hand they have been modernized via Eastern cuisines.

The third recipe from the fifties for the day, moving from breakfast to lunch now. This recipe can be baked in the oven or fried as patties and served as open-face sandwiches on toast. 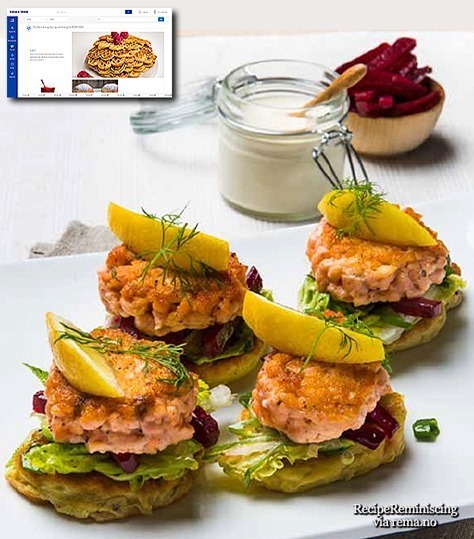 Traditional Irish potato cakes, or boxty, are mostly associated with the north midlands of Ireland in Connacht and Ulster. The people of Mayo, Sligo, Donegal, Fermanagh, Longford, Leitrim and Cavan are particularly big fans of this delicious and simple style of potatoes.

It is thought that boxty dates back to the days or the Irish famine, presumably to make the potatoes stretch further. There are a couple of different recipes, but all contain finely grated, raw potatoes served fried.

Over the last couple of years, as the Irish have become more interested in their own cuisine, the popularity of boxty has risen. It’s now quite normal to see boxty on a menu in a restaurant in Ireland, whereas a decade ago it would have still been considered a ‘peasant dish.’ However, boxty has always been popular as part of Irish home cooking as one traditional (if woefully out-dated) rhyme explains:

Boxty on the griddle,
Boxty in the pan,
If you can’t make boxty,
You’ll never get your man.

Creole cuisine revolves around influences found in Louisiana from populations present in Louisiana before the sale of Louisiana to the United States in the Louisiana Purchase of 1803.

Pan-fried potato cakes (maakouda batata) are a much-loved street food in Morocco, but you’ll also find them prepared at home. This is a traditional version of the patties, made from a mixture of mashed potatoes, garlic, spices and herbs. Zesty seasoning makes all the difference, so don’t be afraid to taste as you go and add some cayenne pepper or notch up the garlic a bit.

Once the patties are shaped, they’re given a dip in egg and flour before heading for the oil. Some Moroccans will dip them in a fritter batter instead. 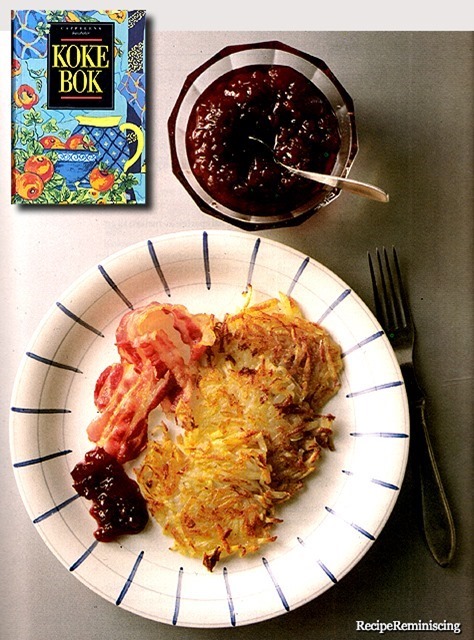 Patties made of fried grated uncooked potatoes are cheap and delicious food that has a long tradition in Scandinavia. With the grating dish on a food processor you grate the potatoes in no time. Serve the potato patties right from the frying pan with fried crisp bacon, coleslaw ,and of course, cranberry jam. 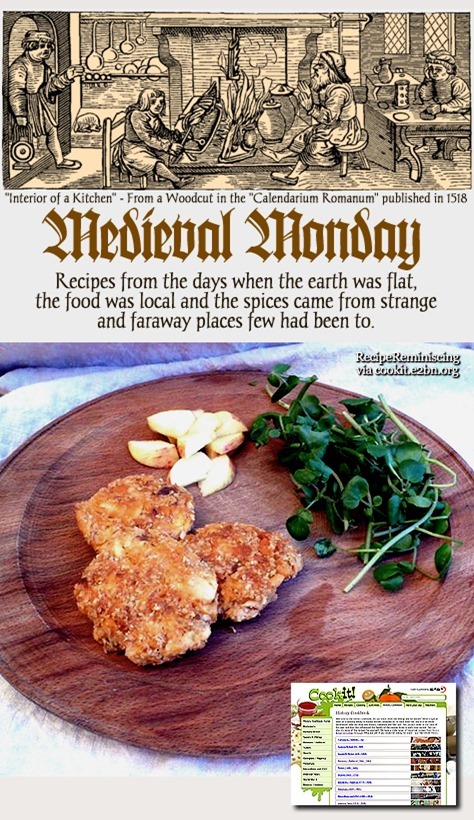 These fish cakes are based on the osterhlaf (a seafood loaf). Salmon is mentioned by Ælfric (an English abbot, and prolific writer who lived around 955 to 1010) but other fish could be used. These are individual patties rather than one large loaf which is difficult to manage cooking on a modern cooker. The oatmeal gives them a light crunchy texture, quite different from fish cakes made with potato. 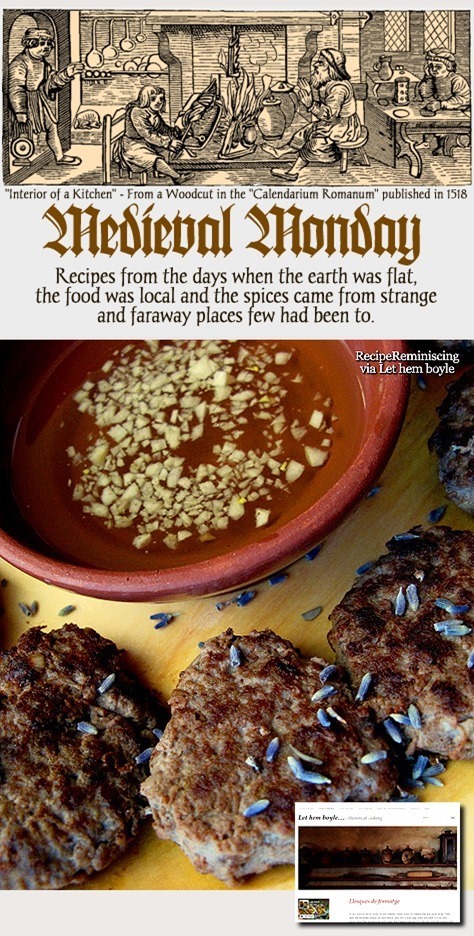 Saara who runs ‘Let Hem Boyle’  writes: This is the recipe that was used by Sayyid Abu al-Hasan and others in Morocco, and they called it isfîriyâ.