A delicious and different mussel recipe found on kiwi.no

Mussel is the common name used for members of several families of bivalve molluscs, from saltwater and freshwater habitats. These groups have in common a shell whose outline is elongated and asymmetrical compared with other edible clams, which are often more or less rounded or oval.

The word “mussel” is most frequently used to mean the edible bivalves of the marine family Mytilidae, most of which live on exposed shores in the intertidal zone, attached by means of their strong byssal threads (“beard”) to a firm substrate. A few species (in the genus Bathymodiolus) have colonised hydrothermal vents associated with deep ocean ridges.

In most marine mussels the shell is longer than it is wide, being wedge-shaped or asymmetrical. The external colour of the shell is often dark blue, blackish, or brown, while the interior is silvery and somewhat nacreous.

An appatizer/tapas recipe found on delish.com

These small bites are big on flavor: crunchy potato chips are topped with smoked salmon, sour cream, pickled shallots, and fresh tarragon. This effortless appetizer is sure to impress.

Green pea soup is a classic spring soup. Replace the marjoram with basil  and the mascarpone with ricotta for a lighter version of this soup.

It is not correct to use the term “cuisine” of French farmhouse cooking. It is more a natural part of life. There is no Machiavellian refined elements or superfluous embellishments. Good, simple ingredients in tasty dishes to suit the season, climate and work.

After the war, celebrated cookery writer Elizabeth David heralded a new, imported cooking culture, popularising French classics such as this beef bourguignon. The dish became popular in Britain in the 1940s. This version is bulked up with vegetables, much as stews would have been at the time due to the rationing.

I can clearly see when studying my collection of old cook books that Scandinavia followed suit about five years later. A remarked interest in Continental cooking, particular French began around 1950 – Ted 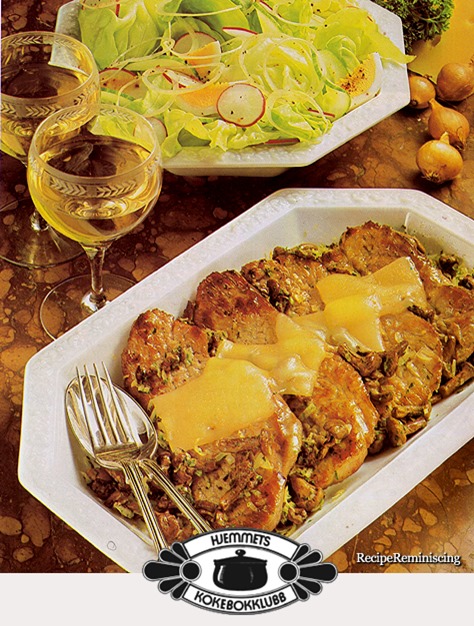 Pork chops is something I don’t think I’ll ever tire of. It was one of my favourites as a kid and I still appreciate a nice pork chop recipe. As I’m also fond of mushrooms of any kind and chanterelles in particular, besides shallots this recipe suits me perfectly – Ted