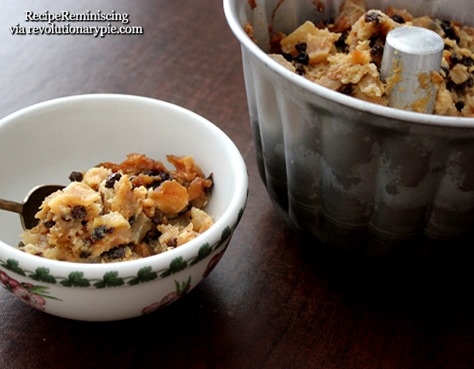 Karen Hammonds who runs https://revolutionarypie.com writes: John Campbell Loudoun’s apple pudding recipe first caught my eye because it was written in verse. A rarity today, rhyming recipes were common in the 19th and early 20th centuries, when they were supposedly used by housewives to help them remember recipes. Loudoun’s poem, attributed to him by Kristie Lynn and Robert Pelton, authors of The Early American Cookbook, is much older, dating back to the 18th century:

If you would have a good pudding, observe what you’re taught: —
Take two pennyworth (six) of eggs, when twelve for the groat:
And of the same fruit that Eve had once chosen,
Well pared and well chopped, at least half-a-dozen;
Six ounces of bread, let your maid eat the crust,
The crumbs must be grated as small as the dust;
Six ounces of currants from the stones you must sort,
Lest they brake out your teeth, and spoil all your sport;
Five ounces of sugar won’t make it too sweet;
Some salt and some nutmeg will make it compleat,
Three hours let it boyle, without hurry or flutter,
And then serve it up without sugar or butter.

Born in Scotland in 1705, the fourth earl of Loudoun was sent to North America in 1756 as governor of the Virginia colony and commander-in-chief of the British forces in America. He was viewed by most colonial leaders as incompetent and was extremely unpopular (and yet a Virginia county was named after him!). Benjamin Franklin wrote that Loudoun’s 1757 campaign against the French was “frivolous, expensive, and disgraceful to our Nation beyond Conception.” Loudoun was recalled to England in 1757.

[1] To make bread crumbs, remove crusts from the bread, then chop in food processor until fine crumbs form.

[3] Butter a one-quart pudding mold, or a baking dish. Pour in batter and cover container with lid or aluminum foil. Bake in preheated 300°F oven for three hours.

[4] Remove pudding from oven and let rest 10-15 minutes, then remove lid or foil. If using a mold, invert the pudding onto a plate if possible; otherwise, serve from the dish. Serve warm, with whipped cream or vanilla ice cream if desired.

Note: I baked this pudding instead of boiling it as I feel the baking method is easier and produces a similar result. If you want to steam the pudding, place the mold in a large kettle on top of metal rack or trivet and pour boiling water into the pot about halfway up the sides of the mold. Cover the pot and cook over medium-low heat, keeping the water at a simmer, for three hours.