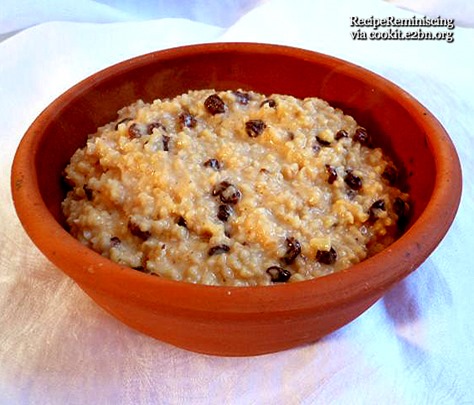 This is a standard dish appearing in many variations over the centuries. It makes a lovely side dish, especially with strongly flavoured meats. It was a symbolic dish in winter, a sign that spring would come. It later came to be served as a festival dish on Twelfth Night (5th of January).

This is the original recipe:

‘To make frumente. Tak clene whete & braye yt wel in a morter tyl the holes gon of; seethe it til it breste in water. Nym it up & lat it cole. Tak good broth & swete mylk of kyn or of almand & tempere it therwith. Nym yelkes of eyren rawe & saffroun & cast therto; salt it: lat it naught boyle after the etren ben cast therinne. Messe it forth.’

Ingredients
140 g (5 oz) cracked wheat, bulgar
1 pint ale (you could use stock instead)
1 large or 2 small eggs
1-2 handfuls of currants
½ teaspoon (or generous pinch) of
cinnamon, nutmeg and ginger
3-4 tablespoons of single cream
a jug of water or stock to top up during cooking
optional: a generous pinch of saffron

[1] Soak the wheat in the ale until it begins to swell, this takes a few hours. (Or boil for 15 minutes and then leave to stand for 15 minutes) Most of the liquid will be absorbed. Add more liquid if the frumenty begins to dry out when cooking.

[2] Add the spices, then boil for a few minutes until the wheat is soft.

[3] Remove from the heat. Add the currants and allow to cool a little.