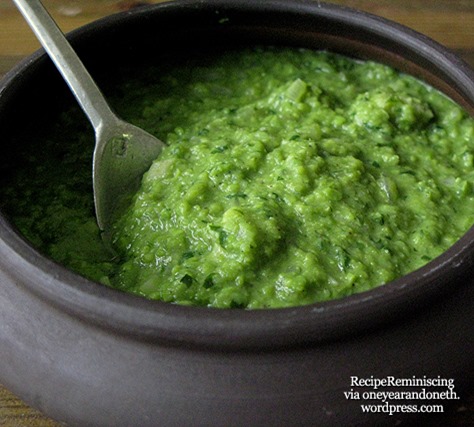 Saara’s who runs “One Year and Thousand Eggs” version:

Serves 4 as a side dish

Put fresh peas to a pot, add water so that the peas are just covered. Boil the peas in low heat until they are very tender and partially broken. Mush the peas and add the chopped onion and chopped fresh parsley. Cook until the onions are cooked. Add pepper, cinnamon, ginger, a pinch of saffron and enough salt. Heat and add breadcrumbs and vinegar. Boil briefly and serve hot.

I decided to use fresh peas, but the dish can be done with dried peas too. Onions must be cooked very well. Terence Scully in the book “The Art of Cookery in the Middle Ages” says that onions in the humoral theory are dangerously moist, so they were usually fried, thus removing a little of their superfluous moisture. I find that very interesting!