A tempting soup with plenty of rutabaga, carrot, cabbage and potatoes. And with small pieces of meat as “spice”.

If you use vegetable broth instead of beef broth in this soup, it will make first-rate vegetarian food. The combination of whole barley, vegetables and potatoes is perfect. Serve it with bread and you have a full meal.

If you want the soup thicker, more like a stew, you just add a little more barley and more potatoes and vegetables. 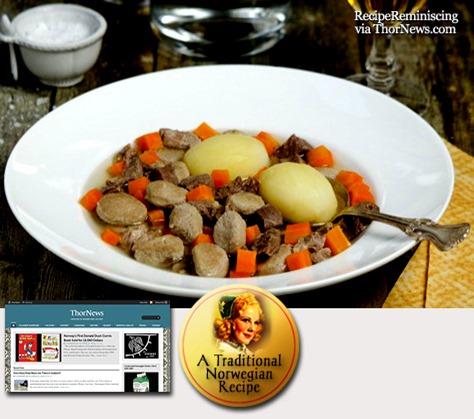 Anette Broteng Christiansen at ThorNews writes: Sodd is a traditional Norwegian soup-like meal with mutton, meatballs, potatoes and carrots. The difference from regular soup is that all the meat and vegetables in the Sodd are boiled separately.

“Sodd” means to seethe and is traditional food from the Trøndelag area in Central Norway. The dish is often served in weddings, confirmation ceremonies or during the Norwegian National Day together with thin flat bread (Flatbrød).

Genuine Sodd from Trøndelag consists of meatballs and dices made ​​of mutton and beef, and broth. The meatballs are made with potato starch, whole milk, heavy cream, ginger and nutmeg. It is important to ensure that the Sodd is not boiling, but holds high temperature.

Sodd was first described in the Saga of Haakon the Good dating back to the 1200s. In the 1800s, it was usually made with horse meat.

It is common to serve ginger ale, lager, home brewed or alcohol-free beer with Sodd.