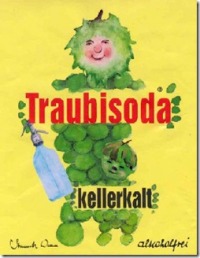 Traubi or traubisoda is a brand of soft drink flavored with grape juice. It is produced in Hungary, Austria and Croatia.

In Hungary, it is made by a factory called Traubi Hungaria located in the village of Balatonvilágos. The company produces the drink from a special type of Hungarian grapes, called saszla. The name Traubi derives from the German word Trauben that means grape. Visiting the factory in Balatonvilágos one can follow the steps of production from grapes harvest to bottling. 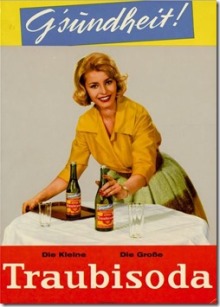 In Austria, it’s produced by Waldquelle Kobersdorf GmbH from Kobersdorf. A Croatian company Trento sokovi licenses it from Waldquelle since 2006, and produces it in Brestovac

The aroma was originally invented by Lenz Moser of Austria in 1954. It was licensed to Traubi Hungaria in 1971. The new flavour became popular not only due to the successful advertisement but also as it appeared to be the first Hungarian fizzy drink. As a result of the growing interest, Traubi was also produced in Kunbaja, Csány and in Debrecen. 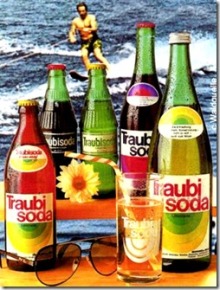 In response to the first fizzy drink success, in 1973 another product, called Márka, appeared on the Hungarian market. This drink proved to be popular that time just as well it is nowadays. Márka is liked for its special orange, grape, sour cherry and raspberry flavor.

In the 1980s, due to the spread of Coca-Cola, Traubi became less popular, the production decreased by 20%. In 1992, Traubi Hungaria bought the factory in Balatonvilágos and by the investment of Salamon Berkowitz (a US owner) the factory started to improve. It grew, not only in numbers of machines but also in production. 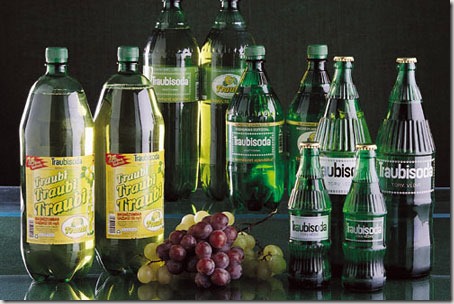 The popularity of the drink was tested through a market research conducted by the producer. The findings clearly showed, that there was a strong nostalgia for the drink among Hungarians who were teenagers in the ’80s. Drinking Traubi evokes memories from Hungarian people’s past, therefore a special importance belongs to this drink. Salamon Berkowitz, the owner of the company Traubi Hungaria claims that the original publicity campaign team, who created the first campaign, has been working on the company’s advertisements and image nowadays. 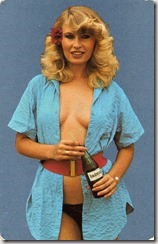 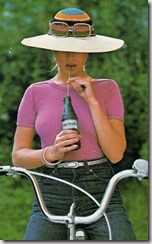