There is nothing better than a slice of good bread and creamy Devondale butter. The holy grail of any good baker is to make the perfect loaf of bread, but for something so simple that we eat every day it’s amazing that it’s so difficult to get right. This kitchen hack will get you a perfect loaf every time without any of the fuss. This recipe was passed down as the secret of the wife of a very famous chef and breaks every rule of making a good loaf of bread.

Analysis of the L. delbrueckii subsp. bulgaricus genome indicates that the bacterium may have originated on the surface of a plant. Milk may have become spontaneously and unintentionally exposed to it through contact with plants, or bacteria may have been transferred from the udder of domestic milk-producing animals.

The origins of yogurt are unknown, but it is thought to have been invented in Mesopotamia around 5000 BC.

In ancient Indian records, the combination of yogurt and honey is called “the food of the gods”. Persian traditions hold that “Abraham owed his fecundity and longevity to the regular ingestion of yogurt”.

The cuisine of ancient Greece included a dairy product known as oxygala (οξύγαλα) which is believed to have been a form of yogurt. Galen (AD 129 – c. 200/c. 216) mentioned that oxygala was consumed with honey, similar to the way thickened Greek yogurt is eaten today.

The oldest writings mentioning yogurt are attributed to Pliny the Elder, who remarked that certain “barbarous nations” knew how “to thicken the milk into a substance with an agreeable acidity”. The use of yogurt by medieval Turks is recorded in the books Diwan Lughat al-Turk by Mahmud Kashgari and Kutadgu Bilig by Yusuf Has Hajib written in the 11th century. Both texts mention the word “yogurt” in different sections and describe its use by nomadic Turks. The earliest yogurts were probably spontaneously fermented by wild bacteria in goat skin bags.

Some accounts suggest that Indian emperor Akbar’s cooks would flavor yogurt with mustard seeds and cinnamon. Another early account of a European encounter with yogurt occurs in French clinical history:

Francis I suffered from a severe diarrhea which no French doctor could cure. His ally Suleiman the Magnificent sent a doctor, who allegedly cured the patient with yogurt. Being grateful, the French king spread around the information about the food which had cured him.

Until the 1900s, yogurt was a staple in diets of people in the Russian Empire (and especially Central Asia and the Caucasus), Western Asia, South Eastern Europe/Balkans, Central Europe, and India. Stamen Grigorov (1878–1945), a Bulgarian student of medicine in Geneva, first examined the microflora of the Bulgarian yogurt. In 1905, he described it as consisting of a spherical and a rod-like lactic acid-producing bacteria. In 1907, the rod-like bacterium was called Bacillus bulgaricus (now Lactobacillus delbrueckii subsp. bulgaricus).

The Russian Nobel laureate and biologist Ilya Ilyich Mechnikov (also known as Élie Metchnikoff), from the Institut Pasteur in Paris, was influenced by Grigorov’s work and hypothesized that regular consumption of yogurt was responsible for the unusually long lifespans of Bulgarian peasants. Believing Lactobacillus to be essential for good health, Mechnikov worked to popularize yogurt as a foodstuff throughout Europe.

Isaac Carasso industrialized the production of yogurt. In 1919, Carasso, who was from Ottoman Salonika, started a small yogurt business in Barcelona, Spain, and named the business Danone (“little Daniel”) after his son. The brand later expanded to the United States under an Americanized version of the name: Dannon.

Yogurt with added fruit jam was patented in 1933 by the Radlická Mlékárna dairy in Prague.

Yogurt was introduced to the United States in the first decade of the twentieth century, influenced by Élie Metchnikoff’s The Prolongation of Life; Optimistic Studies (1908); it was available in tablet form for those with digestive intolerance and

for home culturing. It was popularized by John Harvey Kellogg at the Battle Creek Sanitarium, where it was used both orally and in enemas, and later by Armenian immigrants Sarkis and Rose Colombosian, who started “Colombo and Sons Creamery” in Andover, Massachusetts in 1929.

Colombo Yogurt was originally delivered around New England in a horse-drawn wagon inscribed with the Armenian word “madzoon” which was later changed to “yogurt”, the Turkish name of the product, as Turkish was the lingua franca between immigrants of the various Near Eastern ethnicities who were the main consumers at that time. Yogurt’s popularity in the United States was enhanced in the 1950s and 1960s, when it was presented as a health food. By the late 20th century, yogurt had become a common American food item and Colombo Yogurt was sold in 1993 to General Mills, which discontinued the brand in 2010. 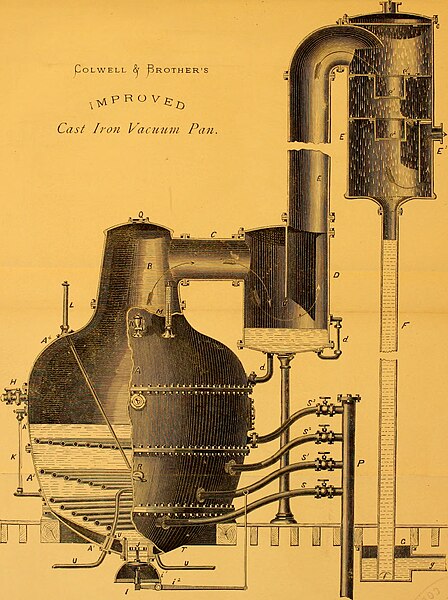 The product takes up half the space of its nutritional equivalent in fresh milk. When the liquid product is mixed with a proportionate amount of water, evaporated milk becomes the rough equivalent of fresh milk. This makes evaporated milk attractive for shipping purposes as it can have a shelf life of months or even years, depending upon the fat and

sugar content. This made evaporated milk very popular before refrigeration as a safe and reliable substitute for perishable fresh milk, which could be shipped easily to locations lacking the means of safe milk production or storage.

The process involves the evaporation of 60% of the water from the milk, followed by homogenization, canning, and heat-sterilization.

Evaporated milk is fresh, homogenized milk from which 60 percent of the water has been removed. After the water has been removed, the product is chilled, stabilized, packaged and sterilized. It is commercially sterilized at 240-245 °F (115-118 °C) for 15 minutes. A slightly caramelized flavor results from the high heat process, and it is slightly darker in color than fresh milk. The evaporation process concentrates the nutrients and the food energy (kcal); unreconstituted evaporated milk contains more nutrients and calories than fresh milk.

A pie recipe from “Delicious Dairy Dishes” published in 1936

Evaporated milk seems to have been the chosen substitute for cream in the US most of the last century. As far as I know we have only one type here in Norway an it is aproparately enough called Vikingmelk – Ted

A dessert recipe from “Cookery In Colour” published in 1960

So who doesn’t like pancakes. Not me at least, and these looks absolutely mouth-watering. And that rum sauce just tops it.

Amazingly good cake! The frosting is made with chocolate with whole hazelnuts. A cake that is both decorative and tastes great. Another recipe that might collide with your weight-loss resolutions, but what the heck, it’s Sunday.

Velvet Porridge with a lump of melting butter, sugar and cinnamon is comfort food for most Norwegians my age. It is a trip down memory lane all the way back to the fifties bringing sweet childhood memories in every spoonful and every drop red juice.

I must admit I’m a real sucker for picnics. My girlfriend and I do picnics from late spring to way into the autumn and Oslo is just about perfect for it. Lovely large parks, the town is surrounded by woodlands perfect for hikes and it has a multitude of public beaches on both sides of the fjord. Who wouldn’t go on picnics in a place like this – Ted

A nice and Christmassy toffee recipe from allers.no

I’ve already posted one recipe for toffees in the Christmas Special, here’s another one and more will follow before the 24th. Everybody like toffees and they are great for the after dinner coffee and a smashing gift for someone you appreciate. Make a few batches while you’re at it.

This kind of Christmas porridge has a long tradition in many families in Norway, but not as dinner, but lunch, on the 24th. And in that porridge many hide a peeled almond and the one that finds it in their porridge wins a prize. In my family as in many others that prize is a huge marzipan pig.

In context:
Syllabub (or solybubbe, sullabub, sullibib, sullybub, sullibub, there is considerable variation in spelling) is an English sweet dish described by the Oxford English Dictionary as “A drink or dish made of milk (freq. as drawn straight from the cow) or cream, curdled by the admixture of wine, cider, or other acid, and often sweetened and flavoured.”

It is reputedly most traditionally made by the milkmaid milking the cow directly into a jug of cider.

History:
Syllabub is known in England at least since John Heywood’s Thersytes of about 1537; “You and I… Muste walke to him and eate a solybubbe.” The word occurs repeatedly, including in Samuel Pepys’ diary for 12 July 1663; “Then to Comissioner Petts and had a good Sullybub.” and in Thomas Hughes’s Tom Brown at Oxford of 1861; “We retire to tea or syllabub beneath the shade of some great oak.”

A later variation, known as an Everlasting Syllabub, adds a stabiliser such as gelatine or corn starch.