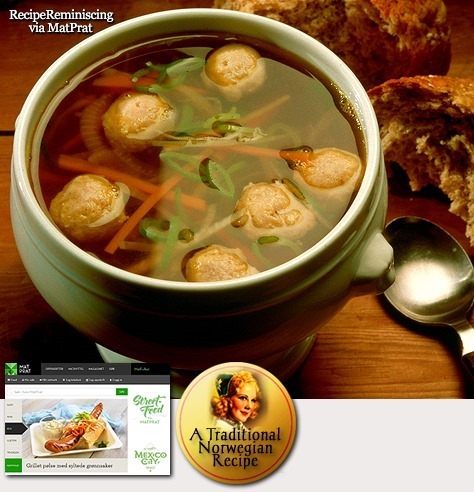 Ground pork, a few vegetables and a bouillon cube or broth are all the ingredients you need to fill your plate with  this delicious, hot soup. Quick and easy.

A recipe for spicy meatballs found on kiwi.no 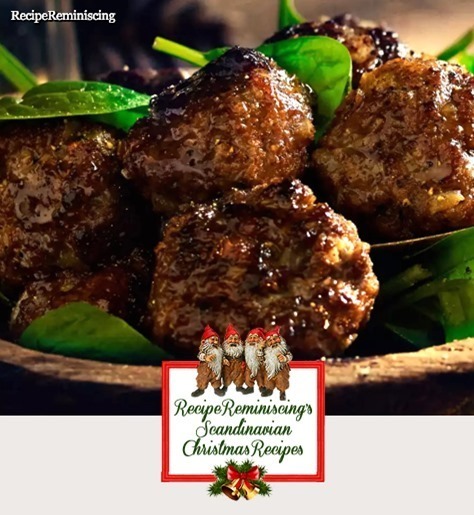 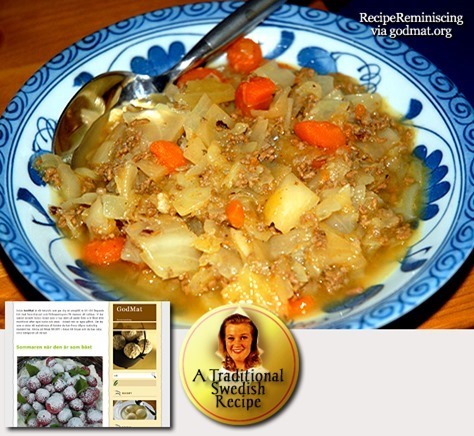 A real autumn dish that is both cheap and easy to prepare. Very  simple to convert to cabbage soup by increasing the spice, broth and water volume. If you have the time,  shape the minced meat into small meatballs. 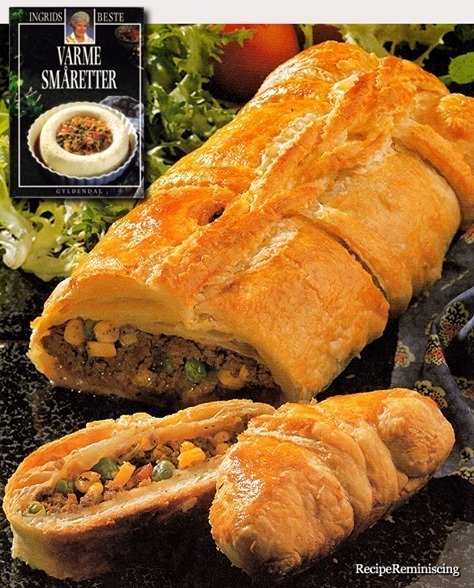 Mixed minced meat wrapped in puff pastry. The filling in this recipe consists of minced meat, spices and a pack of vegetable mix, but you can use your  vegetable mix and season to taste. 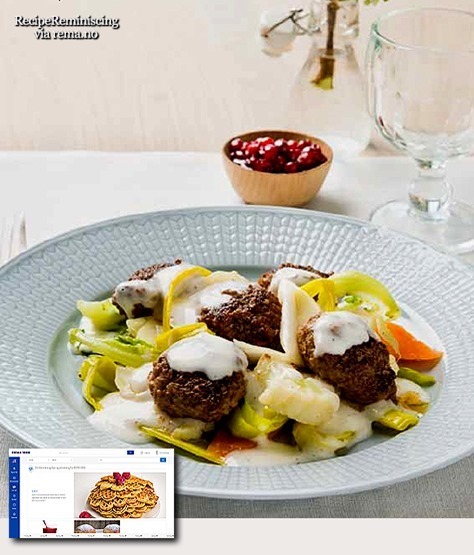 We associate these delicious, small frikadelles first and foremost with the Danes, but they are popular all over Scandinavia. The name, on the other hand, came via Germany, probably from Italian fritto, and refers to the frikadelles being cooked in a frying pan. 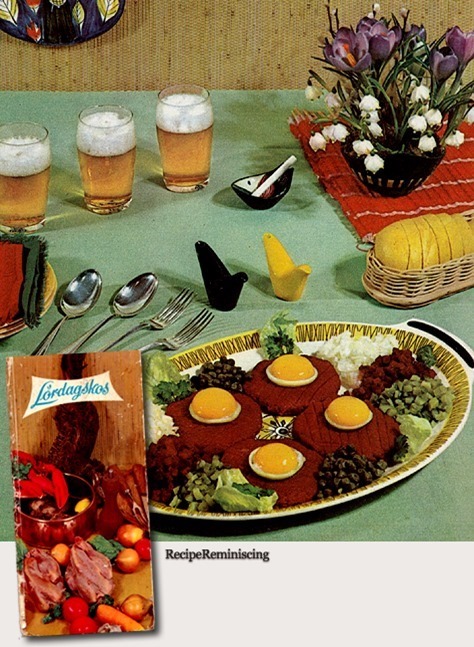 I remember my mother serving sandwiches like these back when this book was new and fashionable. A little unusual for a boy in his early teens, but I quickly became used to it and I still make tartar sandwiches once in a while – Ted

A modern take on the classic Norwegian meatballs
found on gilde.no 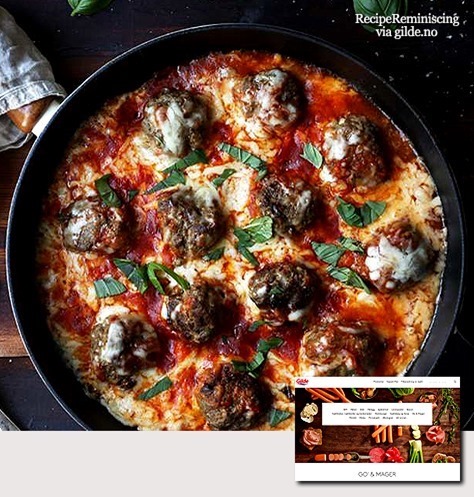 Here you have a delicious contemporary take on the classic
Norwegian meatballs.

Recipe for a spicy everyday dinner found on aperitif.no 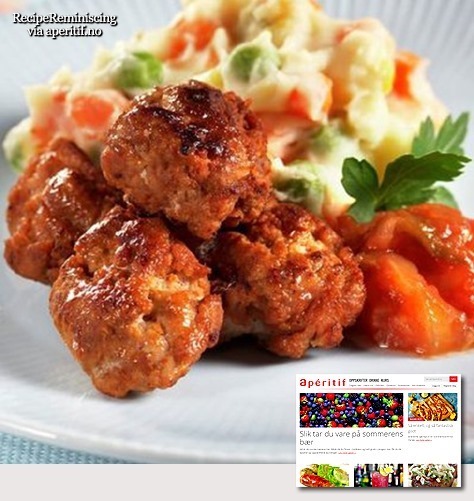 Even though it’s a workday, it does not mean you have to eat boring food for that reason. With a simple twist, you can make a traditional dish new and exciting, like with this recipe. 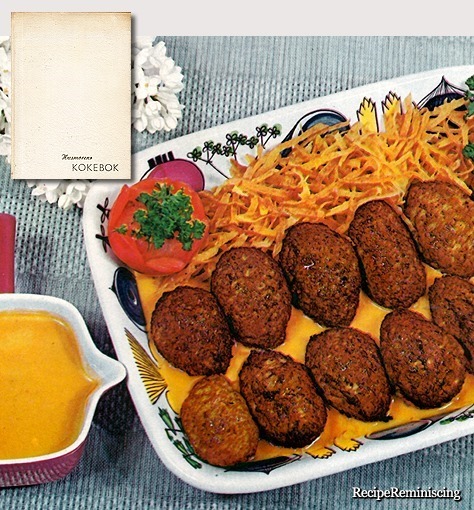 This dish is typical of the dinners here in Norway in the early sixties.
Even the dinnerware and tablecloth are typical for the sixties – Ted 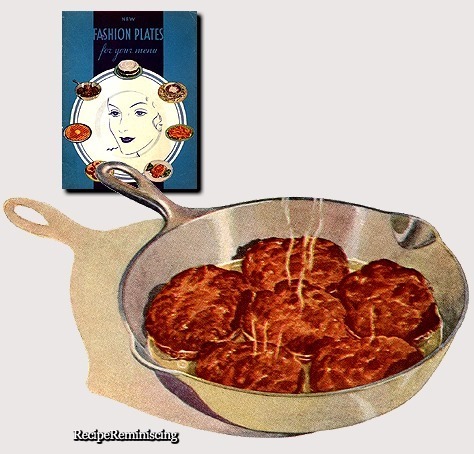 Creole cuisine revolves around influences found in Louisiana from populations present in Louisiana before the sale of Louisiana to the United States in the Louisiana Purchase of 1803. 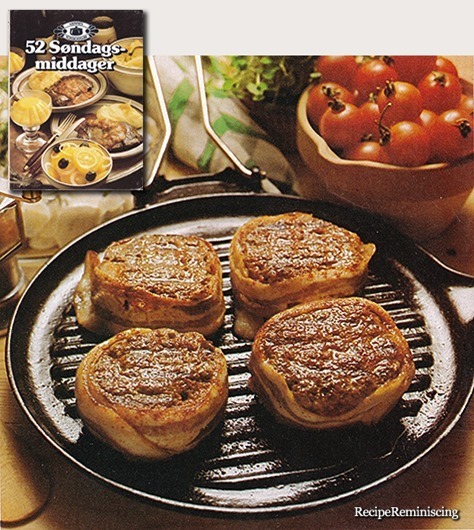 I hope you don’t get too disappointed when you find out that these
steakes are made of minced beef. Norwegians have a tendency to call
large thick patties for steaks. My apologies visitors

Cannelloni (pronounced [kannelˈloːni]; Italian for “large reeds”) are a cylindrical type of pasta generally served baked with a filling and covered by a sauce in Italian cuisine. Some types of cannelloni need to be boiled beforehand, while for others it is enough to use a more dilute sauce or filling.

Popular stuffings include spinach and ricotta or minced beef. The sauces typically used are Napoletani underneath and besciamella sauce to cover the top. 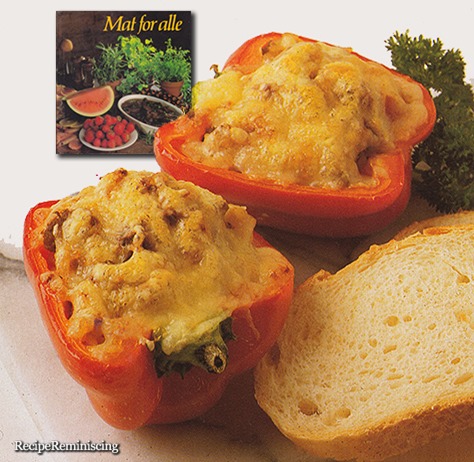 Stuffed peppers and other vegetables are a cooking technique that can be found many places in the world, but to day most of us usually think of it as traditional Middle Eastern way to prepare food. 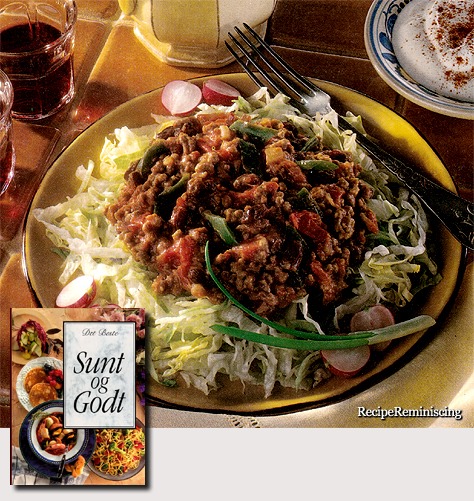 The crispy iceberg lettuce is a refreshing contrast to the strong flavor of the meat sauce. The yogurt has a cooling effect and works well as a side dish. Wholemeal bread and a salad of green beans and squash are excellent accessories. 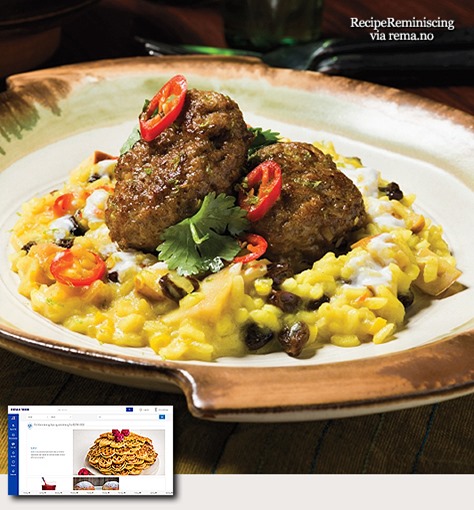 It began with the pursuit of a retail concept that was different than the traditional corner store. On a study trip to Germany in 1977 representatives of the Reitan Group were  impressed by the German discount chain ALDI’s implemented simplicity. When Odd Reitan opened the first REMA grocers February 15th, 1979 at Bromstad in Trondheim it was an ALDI imitation.

In the initial phase the selection was limited to 500-600 articles, but this range was too narrow to be profitable. The store in Mo i Rana, which opened the following year, therefore increased the range of products to 1,000 articles. This was a great success and was continued in the three stores which from then went by the name REMA. It also led to the name of the chain being changed to Rema 1000 – an abbreviation for Reitan Food, 1000 articles.

The REMA 1000 concept has over the years been developed and improved, and the range of articles has changed in step with the times and customers’ shopping habits. But the Reitan Group still work by the same original philosophy.

The Reitan family are among the richest people in Norway and not long ago people like that had a social conscience. But not in our day and age, The Reitan Group has recently changed their beer distribution routines to increase their earnings even more and it is already begining to cost people their jobs at local breweries. Mack Brewery in Tromsø announced today that they are forced to let 35 people go.