A delicious white bread with lots of taste from tine.no 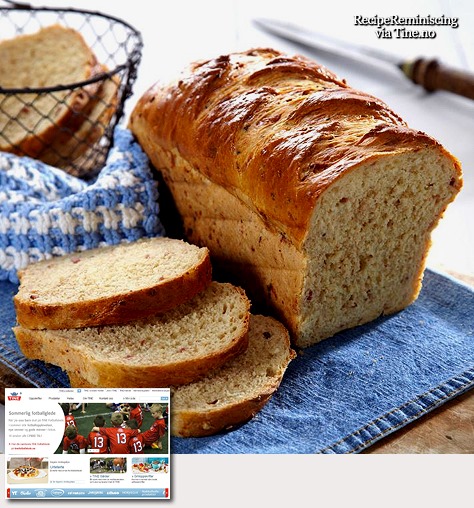 This is an exciting bread with a taste of both bacon, cheese and mustard. The bread tastes deliciously with pasta and soups. To achieve a good result you should knead the dough thoroughly and for a long time. For this recipe you get two loaves, so you need two bread moulds.

Tip: Brush the loaves with water/milk and sprinkle with some grated cheese if you have some to spare, before baking.

In context:
Jarlsberg /ˈjɑrlzbɜrɡ/ cheese is a mild cow’s–milk cheese with large regular holes, commonly referred to as “eyes”, that originates from Jarlsberg, Norway.

Jarlsberg cheese has a yellow-wax rind (outer layer) and a semi-firm yellow interior. It is a mild, buttery cheese. The flavour is “clean and rich, with a slightly sweet and nutty flavour.” It is an all-purpose cheese, used for both cooking and eating as a snack. It has a characteristic smooth, shiny-yellow body, and a creamy supple texture. It is aged a minimum of one year and is distinguished by medium to large holes.

The history of this cheese can be traced back to the middle 1850s. Anders Larsen Bakke (1815–1899), a farmer and pioneer in Norway’s dairy industry, produced cheese in the Våle village in what was then the county of Jarlsberg and Larviks Amt (now Vestfold), 80 km south of Oslo. The cheese shares similarities with Emmental, introduced to Vestfold by Swiss cheese makers during the 1830s. The cheese was first noted in the annual county report of Jarlsberg and Larviks Amt in 1855. After a several years of popularity marked by a large volume of production Jarlsberg disappeared from the market.

Modern Jarlsberg cheese was developed in 1956 by Ole Martin Ystgaard of the Dairy Institute at the Agricultural University of Norway. Ystgaard’s interest was sparked by the thesis of a dairy sciences student, Per Sakshaug, on the cheese historically made in Vestfold. It was named for a Norwegian nobleman Count Wedel Jarlsberg (or the eponymous county) who owned land near Oslo in an area where an earlier version of the cheese was produced in the early 1800s. The recipe was developed from a formulae originating with Swiss cheese makers who moved to Norway in that time. From Wikipedia 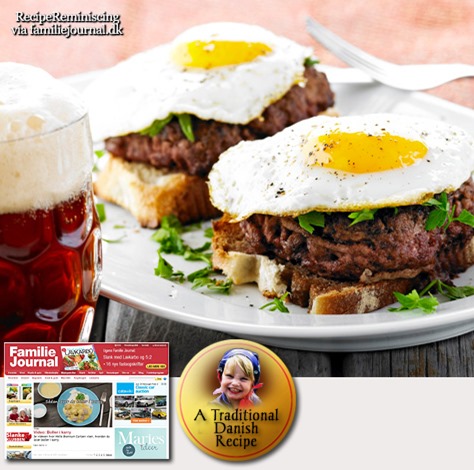 A classic Danish lunch/evening meal made in 20 minutes. A good example of the simplicity, yet deliciousness that often is the characteristics of a traditional Danish dish.

Pirogues is actually originally a Russian pastry butter dough with meat, cabbage, jam and the like. These pirate pirogues are inspired by the Russian cuisine.

Tip: A fun way to let the loaves rise is to put them in a basket so they get a patterned from the weave in the basket. Brush loaves and sprinkle a lot of flour in the basket before you put the dough in it to rise. Make sure you have enough flour so the dough does not cling to the basket as you vault loaves out.

A nice variation on mashed potatoes found on frukt.no

A classic stew from Bergen found on dinmat.no

This dish comes from Bergen but it is very similar to Irish Stew and it is not quite unlikely that the stew has found its way across the North Sea to the Norwegian west coast at one time. The strong bonds between The British Isles and Norway runs all the way back to the Viking era.

Rug is a cereal that provides a rich, juicy flavour, and bread baked with rye has a longer shelf life. These rye cakes are from a very old Swedish recipe and are great to serve piping hot with butter, cheese or jam with a cup of tea or coffee. They are also well suited to serve with a soup or a good salad.

Bye the way, the whole in the middle of the cakes were for putting a wooden rod through them and hanging them from the roof to keep them away from mice and rats.

Tip: There are a lot of good bread you can bake with rye. There are both coarser to finer mill qualities. If you find rye bread a bit heavy and compact, try baking it with sourdough.

The girl who runs picturebritain writes: The Bakewell Tart (not quite the same as a Bakewell pudding) is a delicious, flaky, buttery, jammy British treat. Simple to make and lovely as one large tart or in individual servings, this sounds like a beautiful dessert or afternoon treat.

As far as I can make out, the Bakewell Tart has a rather mysterious past. But the story of its origins that is most widely circulated is that long ago in the town of Bakewell, Derbyshire, the landlady of the White Horse Inn (now the Rutland Arms Hotel) instructed her cook to make a pudding for their guests–an egg mixture (plus a secret ingredient) spread over a pastry crust and covered with jam. The muddleheaded cook messed it up, though, and put the jam on the bottom instead. The landlady was probably pretty miffed, but the guests raved and thus was born the Bakewell Tart in all of its almond and raspberry jam glory.

A traditional Norwegian dessert with a modern twist.

A delicious and refreshing salad from frukt.no

Raspberry, spicy mango chutney and chicken taste wonderful together in this simple salad. Server it for dinner along with some good bread one day you’re in a hurry.

A griddle was standard in most Norwegian homes in the old days. And bread like this would have been made on those and not in a skillet back then just like flatbread lefse, sveler and lomper. 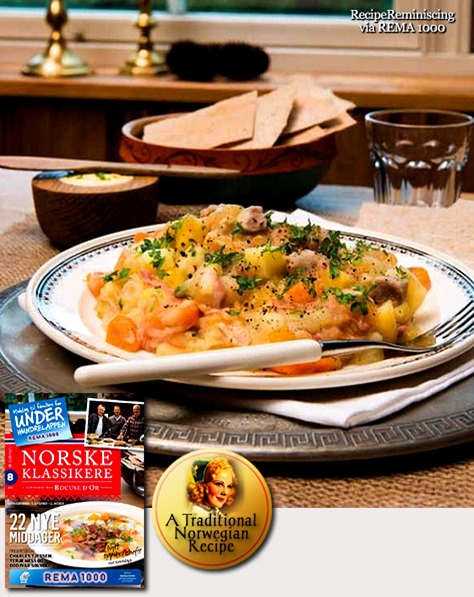 We got three kinds of “lapskaus” in Norway; soup lapskaus, light lapskaus and brown lapskaus, all traditional dishes, and the word “lapskaus” does not in any way describe what sort of dishes we’re talking about, it makes no sense at all really, so when I decided to post this post to day I took it upon me to find out where the word comes from.

Surprisingly enough “lapskaus” comes from the English “lobscouse”. The origin is uncertain, but probably the word is composed of “lob” meaning lump, and “course” meaning course or dish. Translated into modern language it simply becomes “lumpy dish”, which is a straightforward enough description of the different Norwegian versions of lapskaus.

In context:
Like with most traditional dishes around the world you would find a lot of different recipes for lapskaus in Norway. My mother, for instance, made hers with beef and not pork and she never used celeriac or onions and she served it with wholemeal bread and not flatbread. And as a good son, that’s how I make and serve mine – Ted 😉

A delicious spice cake with honey found on joker.no

Honey can be used as a flavour enhancer in almost all cooking where you are considering using sugar. In all kinds of spice cakes honey is particularly suitable. Remember, You need not have a cold to enjoy a spoonful of honey stirred in hot water with lemon, or in hot milk.

A delicious soup with an exotic touch. A rich, hearty soup you’ll learn to appreciate.

A delicious nut bread that fits any meal. The content of nuts provides a bread with an exciting taste. Excellent accessory for a cheese platter, for a casserole dinner or on its own in the picnic basket.